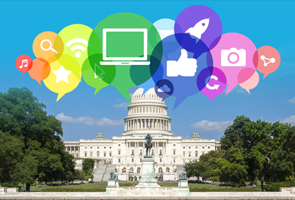 Social media is heavily relied on by citizens and businesses for a wealth of information - from service updates, to employment information and changes in the law. It also benefits governments by helping them improve their service through a direct communication channel, making it possible to converse and discuss policies. With this heavy usage and two-way benefit, social media communications are considered official government publications to which the Freedom of Information Act (FOIA) applies - a law that ensues government transparency and fair public access to records of interest.

The Federal Records Act (44 U.S.C. 3301) defines Federal records as any material that is recorded, made or received in the course of Federal business, regardless of its form or characteristics, and is worthy of preservation. The nation’s recordkeeper, The National Archives and Records Administration (NARA), has also shared the following questions as guidance in helping determine if your social media content is considered a federal record. Answering yes to any of all of these would constitute the content as a federal record that must follow preservation expectations:

While open records laws differ per state, the essence of what must be collected is very much the same. A complete Federal record must contain content as well as metadata such as date and location of creation, and should be preserved in a format that proves data authenticity and integrity.

There are numerous ways in which organizations meet these expectations, from using web crawling software to create local versions of their content, to using web capture tools, exporting content from tools built into existing social media properties, or making use of APIs to pull content.

Whichever route is taken, governments must comply with these laws by ensuring their internal processes and systems allow for easy delivery of information kept in house upon request, under short deadlines, and at minimal cost. With many factors to be taken into consideration, the use of third-party social media archiving partners like PageFreezer is common.

Complying with open records laws can cost governments thousands a year, at an average of $678 per information request. A recent report from Washington State’s Auditors Office highlighted the high costs of open records by revealing that state and local governments spent $60 million to fill more than 285,000 public-records requests during a recent 12-month period.

Government agencies are beginning to look into more ways to be transparent with their online content off the top. Making efforts to establish itself as a leader in forward-thinking cities, The City of Sacramento is an example of one city making massive efforts to build public trust and give its citizens greater insight into its objectives and operations through its transparency strategy.

Using 6 websites and over 75 social media accounts, The City of Sacramento is heavily dependent on its online properties to communicate key information to its citizens from project updates, to employment information and even offering online services like animal services and traffic alerts. Taking the time to ensure any data of interest or use to its citizens can be easily found and accessed, the City partnered with PageFreezer to archive all of its social media accounts and websites. The content is now available through PageFreezer’s Public Portal, allowing for easy browsing of archives or full text keyword search. Visit the portal here

Learn more about PageFreezer for Government