As more of our personal and professional lives play out online and within digital spaces, it’s unsurprising to learn that an increasing amount of electronic evidence is being presented to the courts in relation to a wide number of legal cases. In fact, the worldwide Digital Forensics industry is expected to grow at a CAGR of 13% between 2020 to 2027. 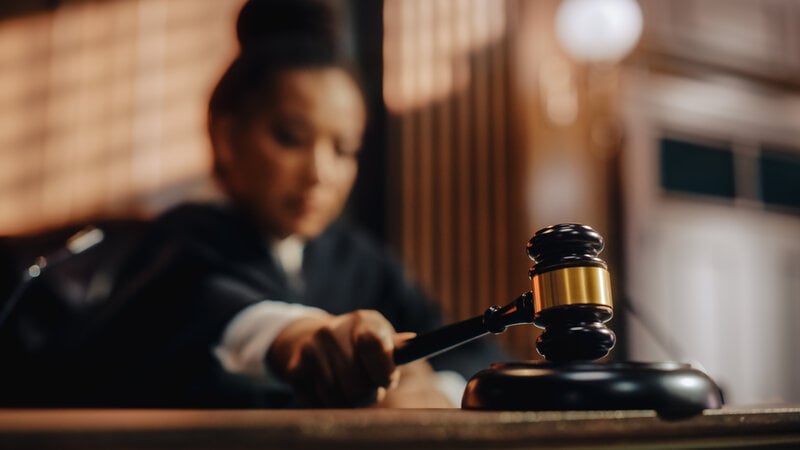 In recent times, the accelerating impact of the Coronavirus pandemic has doubtless increased this phenomenon. The home working necessitated by country-wide lockdowns and shelter-in-place orders has meant a rapid uptick in the use of digital communication in professional settings, both through collaboration platforms and via the use of personal mobile devices. More interactions, in any setting, will unfortunately mean more conflicts and challenges, resulting in the need for more digital evidence to be collected.

In any instance where evidence is presented, there’s the potential for deception. The digital space is no different. What happens when fake electronic evidence is used in court? In this article, we’ll explore some of the issues that courts are encountering when it comes to falsification of digital evidence or testimonies, and discuss a few preventative, protective measures.

Courts & the Rise of Electronic Evidence

Courts represent some of the most well-established and historic establishments in any community. With its use of Latin, judges' flowing robes, and tendency towards formality, courts can seem to reflect a bygone age. In reality, of course, nothing could be further from the truth. In the modern day, courts are evolving as a matter of necessity, to keep pace with the rapidly changing digital landscape, as well as their own intersection with technology.

When it comes to the evidence processed, as already discussed, courts are undoubtedly dealing with higher volumes of digital evidence. Additionally, they also have to contend with increasingly sophisticated methods of falsification, creating fake digital evidence.

Courts have also had to cope with the huge pivot that the pandemic necessitated in terms of virtual hearings. Without being able to examine cases in person, video conferencing provided an alternative that enabled justice to continue to be served, but it was not without its challenges. In particular, the coaching of witnesses provided considerable cause for concern.

A Study In Digital Deception

Let’s explore an instance where fake electronic evidence and digital deception were leveraged with the intention of misleading a court. The case of Lenihan v. Shankar saw a considerable amount of electronic forgery and fraud. This custody litigation was the result of a dispute between a father based in the United States and a mother who relocated to Canada while pregnant. The mother obtained permanent-residency status in Canada and was proactively taking measures to keep her daughter from being seen by her American father.

When the case came to trial, the mother was found to have falsified a paternity test, forged a sperm donor agreement, and created fake email exchanges, which she claimed were the result of exchanges made between her and the father. The issue was so clear-cut that upon realizing their unwitting participation in presenting false evidence to the court, her trial counsel immediately called to have it withdrawn from the record.

After absconding to India, the mother continued to participate in the legal proceedings via Zoom. She called a witness on Zoom, but it soon became clear to the judge, Justice McGee, that they were bogus, and as a result, they were swiftly disqualified. The witness in question claimed to be the girl’s biological father, but “had the appearance of a student” and raised suspicions when he appeared to read answers to prepared questions. Another witness admitted that she had never had dealings or interaction with the mother and that the statement submitted on her behalf was entirely false, complete with a forged signature.

What’s notable here is the wide range of digital sources from which this fake digital evidence was generated—from email to SMS, co-parenting apps, social media, and video calling.

Key Learnings from This Case

This case highlights the importance of saving all electronic communications and other documents in a reliable electronic format. Digital evidence is easily tampered with, and having a defensible record of all online communications does more than provide the owner with a solid source of evidence. It also means that, should fake electronic evidence be submitted in an attempt to pervert the outcome of the case in question, a reliable counter can be made and backed up.

Legal teams should always look into the authenticity of everything they're presented with. Hash values and metadata are crucial in making sure that digital evidence is authentic. Additionally, in order for digital evidence to be credible when presented in court, the manner and method of its collection are of paramount importance. Ultimately, there’s a need to show how documents have been captured, preserved, and presented. Showing a clear chain of custody is essential.

The Future of Fake Electronic Evidence

Another likelihood is the rise of deep fake technology, especially now that this is becoming more readily accessible and easy to operate. Thankfully, the techniques used to discover and disprove fake digital evidence are also improving. Metadata plays an important role here, as it can help to add vital additional context to collected evidence, such as timing or location details. Metadata linked to German Green Party politician Malte Spitz's telephone use, for example, was used to confirm his every move.

Digital evidence can be lost quickly, as posts are edited or deleted. As a result, there’s a temptation to capture evidence quickly, using screenshots, but this method of capture is frequently attacked as being too easily tampered with via editing, and can also mean that management and presentation of evidence is cumbersome and time-consuming. Working with a solution such as WebPreserver enables you to rapidly capture entire online exchanges or social feeds in just a couple of clicks.

Similarly, any evidence captured via automated archiving carried out by Pagefreezer will be collected in a fully secure and searchable manner, with all necessary metadata and timestamping applied, to help create more robust and dependable digital evidence that any court would be happy to accept.

When it comes to the future of digital evidence, preparation will be key. As technology designed to forge and fake becomes ever more advanced, the need to counter this deception also grows. By ensuring that a clear chain of custody is maintained at all times with any collected evidence, you can not only help to support your own case but also be ready with a defense if false allegations are made.

To help legal teams understand what's needed to authenticate digital evidence under FRE 902(13) and (14), Pagefreezer has created a comprehensive white paper that dives into the details and condenses hundreds of pages of official guidelines. Simply click the button below to download the paper. 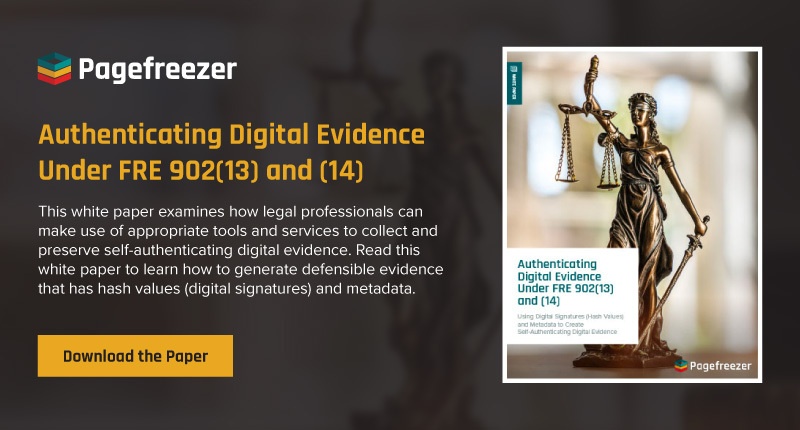