Pagefreezer recently partnered with the Association of Corporate Counsel (ACC) to create a report that examines how in-house legal teams are dealing with modern data sources. The report, called the Collecting Online Data for eDiscovery & Litigation Readiness Report, surveyed 211 in-house counsels across 23 industries and 22 countries.

The results are fascinating and reveal important quantitative insights into both the maturity level of IG programs and the extent to which legal departments are prepared for the eDiscovery processes involved in potential litigation.

It’s that second component of the results—the issue of litigation readiness—that I want to highlight in this blog post. As part of the survey, we asked respondents the following question:

Q. If a legal matter arose tomorrow, how quickly and easily would you be able to find, collect, and preserve relevant records for each data source?

These were the results to the question above: 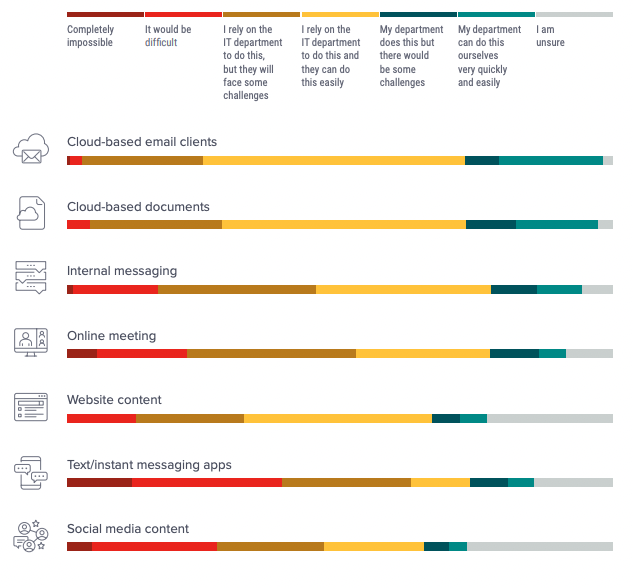 Looking at these results, a few things are particularly interesting:

These results are important and insightful because they highlight four challenges that legal teams need to address if they want to deal effectively with modern ESI.

1. An Overreliance on the IT Department

While it’s understandable that legal teams tend to rely on an IT department to collect ESI, this approach is simply becoming too slow and inefficient. With the number of data sources—and the sheer amount of data—growing at an incredible rate, it’s becoming difficult for the IT department to assist in every request from a legal or compliance team.

For example, just consider a request to find and collect a direct Slack conversation. This conversation could be incredibly hard to find if the organization has thousands of Slack users and channels spread across multiple workspaces. The same is true of an old Facebook post, company webpage, or text message. With so much data being created (in real-time) across so many platforms, a seemingly simple request could be overwhelming.

There’s also a risk that crucial evidence could be overlooked. An IT professional won’t have the same level of insight into a matter that a member of the legal team has, which is why they could scroll right past ESI that should be collected and preserved. So, it’s far better for the legal or eDiscovery teams to do this collecting themselves, preferably using a sophisticated tool built for the job.

2. Lack of Insight into Collaboration Tools

Even before the pandemic, collaboration platforms were transforming how organizations operate, but they have now become essential tools that facilitate day-to-day communication and collaboration within many companies.

This means that legal and eDiscovery teams simply can’t ignore these platforms. Courts have made it clear that collaboration content is discoverable, so teams need to find a way to manage all the unstructured data hiding inside these tools.

As we’ve discussed before, there are several reasons why collaboration content is hard to work with. First, content is dynamic and real-time, which results in an overwhelming number of records being created. It is also incredibly multifaceted. People aren’t just sending messages—conversations are typically filled with GIFs, videos, images, and countless other file formats. Add to this the fact that so many other applications integrate with team collaboration platforms, and you have a very complex web of data to untangle.

There are also limited access and search capabilities. Although most platforms offer some sort of native search functionality, these haven’t been designed with eDiscovery in mind. And no one (not even the primary platform administrator) can search through private conversations, so there’s no way to identify relevant conversations directly through the platform itself.

To deal with limited in-platform access, the major platforms offer some form of eDiscovery/compliance export, but these are typically in JSON format, which looks nothing like the original messages and make it almost impossible to understand context and intent. Below is a simple message (“Hello world”) that has been starred and pinned, and has a couple of reactions. 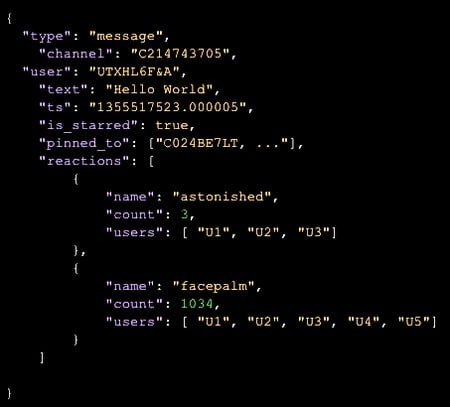 A data source like email has been around for a long time, and as a result, mature systems and processes exist for dealing with this ESI. In contrast, enterprise collaboration platforms are relatively new and currently lack built-in eDiscovery functionality, while existing eDiscovery tools struggle to ingest and manage collaboration content.

But luckily new tools exist to make the process much easier—there’s no need to deal with confusing JSON files. Have a look at Pagefreezer’s solution below to see how much easier eDiscovery related to a collaboration tool can be.

As mentioned earlier, around 50% of our survey respondents either said that collecting and producing this data would be difficult—or they were completely unsure as to how (or even if) this data could be collected and preserved.

This same concern was raised during the Legalweek(year) 2021 online event. During one session we attended, a speaker noted that: “Considering how much the average person relies on text messaging for communication, it’s suspicious how often text messages aren’t included on lists of ESI to be collected.” In many organizations, it’s not uncommon for employees to use text messages to communicate with each other and with external partners and customers, yet this data is often not considered during a legal matter.

Text messages and chat apps like WhatsApp have been central to many cases—and relevant data on personal devices are often considered discoverable. But as these legal matters have also shown, legal teams lack access to this data—or, if they do have access, the quality of the evidence (typically a screenshot) is simply not good enough. So, organizations must find a better solution for collecting and preserving text messages in a defensible format.

It is all too easy for a social media post or webpage to form part of a legal matter. It’s particularly prevalent in highly regulated and highly-litigated industries, such as healthcare and financial services, where plaintiffs are quick to point to a badly-worded Facebook post or product webpage as evidence of false advertising.

Yet, as our research report shows, many legal departments struggle to work with this content. The IT department might be able to help, but even then, the result is too often a JPEG or content management system (CMS) backup file that lacks the metadata needed to prove authenticity.

Legal teams need a better way of collecting and preserving web-based content. Ideally, they need a solution designed for eDiscovery that allows them to view a website or social media account exactly as they appeared on any given day—and to export this ESI in a format that would stand up in court.

The above article only deals with one question from the report. Download the full (free) report below to get similar insights, and to see how your IG practices compare to that of other organizations. 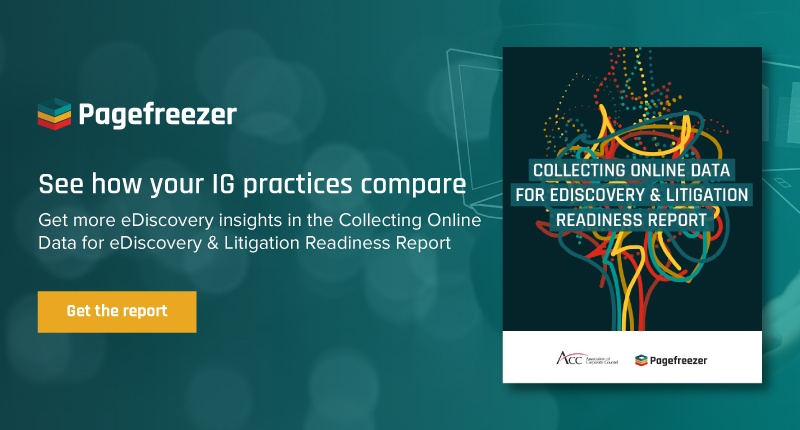