As more people go online, it's never been more critical to understand all the types of bullying and abuse that can occur on social media. Below are the ten most common forms of social media bullying and harassment to watch out for; keep reading to learn more.

Cyberstalking is when someone uses the internet and electronic communication to follow, harass, and even threaten another person. Remember, cyberstalking is a criminal offense that can take many forms, such as unwanted contact through email, chat forums, and social media. A good safety tip is never to reuse passwords for every social media to avoid someone gaining unauthorized access to your account.

As an example of cyberstalking, in Temecula, California, an art gallery owner decided to target specific members of the local art community. This individual regularly sent threats via text messages and emails and defamed his victims on social media. Once the content was live, he would openly demand thousands of dollars to remove the posts.

Online impersonation is stealing another person's identity to commit fraud. This act can cause the victim to suffer social media defamation or reputational damage. Recently, studies have shown that online impersonations continue to grow each year.

Typically, malicious actors will create a fake social media account and attempt to conduct phishing scams, hoping to separate unsuspecting victims from their hard-earned money. A good safety tip is never to reuse passwords for your social media accounts to avoid someone gaining unauthorized access.

In a recent debacle, Elon Musk allowed anyone to pay $8 for a verified blue checkmark on their Twitter account. This change resulted in a massive surge in people creating fake accounts of politicians, celebrities, and even massive corporations, resulting in serious financial losses for several firms across the globe.

Catfishing is when a person uses a fake identity on a social media platform or online dating app to pursue a relationship. This trend continues to grow as more people connect with social media and dating apps. Catfishing isn't illegal, but it can lead to a more serious situation involving the exchange of large sums of money.

One of the most notable catfishing cases centered on Notre Dame football player Manti Te'o, who was reasonably well-known on the field but became famous for being publicly catfished. It turns out that Te'o had thought that his online girlfriend had passed away due to leukemia.

In reality, this supposed girlfriend didn't exist, and a male acquaintance had made a fake profile. As it turns out, the other player who made this fake account was grappling with their own personal challenges, and the catfishing was an outlet for this person to be themselves.

The act of doxxing is when someone releases someone else's personal information with the sole motive of causing harm. Those who are doxxed can have private information such as home addresses, phone numbers, and family details open for the world to see on the internet.

Initially, doxxing began in the world of video games. In 2014 a video game developer named Zoe Quinn saw this firsthand, with her spiteful ex-boyfriend throwing cruel and baseless accusations around the internet. He then released her personal information online, causing her to face relentless social media harassment.

Swatting is incredibly dangerous and illegal. Swatting is when the police receive a fake call about a made-up deadly situation. The part that makes this different is that someone's usually doxxed first, with their personal information publicly released. Once the call is complete, victims can find their door suddenly broken down by the police and a SWAT team looking for them.

Swatting is another form of social media bullying that has its roots in gaming. Two men by the name of Casey Viner and Shane Gaskill got into a fight online while playing a video game. Due to this fight, Viner decided he would ask an acquaintance, Tyler Barriss, to get Gaskill swatted.

In the end, the police went to the wrong house and killed Andrew Finch while standing on his front porch. Ultimately, Viner and Gaskill were sentenced to involuntary manslaughter, spending several years in prison. At the same time, Barriss pleaded guilty to over fifty felonies relating to making other swatting calls to many other police departments.

Trolling is just about the most common type of social media abuse. The act of trolling is when a bully makes unkind and harassment-like comments to their victim online. While some trolls take a milder approach, others prefer to publicly gaslight and humiliate their victims. Trolls only have one goal: to provoke an emotional response from their victim while hiding behind the safety of their screen.

A writer by the name of Lindy West experienced this on a very personal level. She was constantly a victim of trolling on social media and through her email whenever she published content about topics on rape or feminism. One troll even resorted to making a fake account of West’s recently deceased father, causing tremendous emotional anguish.

Dogpiling is when a mob of trolls responds to a single comment with overwhelming insults, hate, and angry comments forcing the author into withdrawing their opinion. This type of abuse happens because the other users either don't agree or like the shared comment, resulting in a virtual dogpile with everyone joining the attack.

A significant aspect of dogpiling is its mob mentality, which can happen after major sporting events involving alcohol consumption. These scenarios are where it can be easy for someone to join in with the crowd, doing or saying things that might be against their nature.

Almost everyone can recall a time, before social media, when they had endured the wrath of a bully, be it in the workplace or schoolyard. Cyberbullying is like that, but harassment and abuse are all online. It's considered by many to be the oldest form of social media harassment, and the only difference is that this new version can follow victims anywhere.

A study released by the Journal of Health Economics (shared by Very Well Family) found a strong link between cyberbullying and suicide. The researchers uncovered that victims of cyberbullying were 8% more likely to attempt suicide and 15% more likely to suffer from suicidal thoughts, with these trends being more common in men than women.

The definition of hate speech is when a person writes or says something online that is threatening and abusive. In these cases, abusers target people based on gender, religion, race, or sexual orientation. This form of social media abuse is challenging to seek justice against because abusers will state they were exercising their right to freedom of speech.

10 Ways to Protect Yourself from Social Media Abuse and Harassment

For every problem, there's a solution. In this case, the answer is education about protecting yourself from social media abuse and harassment. Although social media defamation and bullying will never entirely disappear, knowing what to look out for, and how to handle a situation, can make a massive difference.

Read our blog post below to find out how you can protect yourself against social media abuse and harassment. 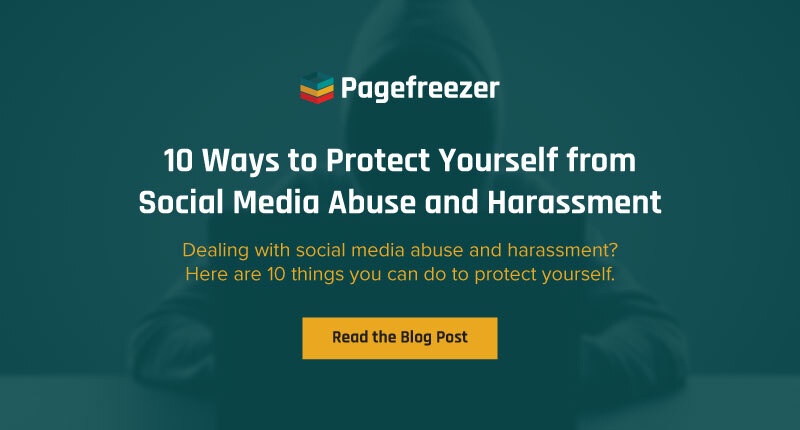 Michael Paulyn is a copywriter, content marketer, and storyteller who focuses on the intersection between technology and the legal system. With a background in business, along with criminology and law, Michael investigates how advancements in the tech sector are continuously influencing and reshaping the law.